Take a deep breath, close your eyes, wait…. Don’t close your eyes…. Just keep reading. Okay, let’s start over, shall we? Picture yourself as an old man, and all you do is watch college football. You’re a retired writer for some big news company, like SportsbyStats, and in the year 2016 you were given the chance to become a Heisman voter. Who do you vote for? Why should you vote for that person? Well don’t worry, I am going to give you all the answers your old, decrepit, wrinkly, and sometimes greasy self needs to make a decision. According to ESPN (Every Story is Pathetic Nonsense) the top 5 canidates for this year’s Heisman are Lamar Jackson, Dede Westbrook, Deshaun Watson, D’Onta Foreman, and Baker Mayfield. All very good college players in their own rights, but who do you choose? I will give you my best 3 and who I think SHOULD win. 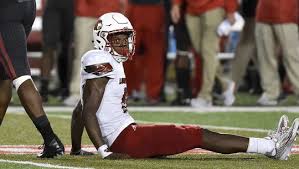 His stats are off the charts, but his chances to win are hanging by a thread on the side of the Grand Canyon. With two devastating losses to Houston and Kentucky to end the season, Jackson seems to be imploding. The final 25% of the season (3 games) Jackson has only accounted for 4 TD’s. To make matters worse, all 3 teams weren’t even ranked. You look at all the games he got more than 4 TD’s in, and all you see are the likes of Marshall, Charlotte, Virginia and Boston College. Against Clemson, Florida State and Duke, Jackson only accounted for 3 scores. The last couple QB’s to win the Heisman had a huge statement win. Where is Jackson’s? Winston had Clemson, Manziel had Bama, and Jackson has a three-loss Florida State? He is the front runner today, but I don’t see that continuing as all the candidates head to New York.

This is a case of Great College Player on the worst team EVER. Now I am a graduate of Texas A&M but you have to respect what this guy has done for the University of Texas. His O-line is Swiss cheese, his QB is a true freshman, and his defense gives up 50 points per game. If you look at Derrick Henry, 2015 Heisman winner, the numbers are shockingly similar. Henry out gained Foreman by 200 yards, but also had 72 more carries. Now I also understand Henry did this in the SEC, but have you seen the Crimson Tide Offense line over the last 5 years? Pretty sure it’s the Patriots O-line with Bama gear on. I truly believe Foreman is the best Running back in the game right now, but being on a team that isn’t going bowling is definitely holding him back from the Heisman Glory, Maybe next year bud. 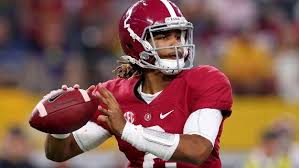 University of Alabama, best college football program for the past decade. There I said it. If your not a Bama Fan, you hate Bama. Love or hate, you have to respect the consistency from Nick Saban’s Crimson Tide. In my humble opinion, which is said to be worth $63.74, Jalen Hurts has been the most consistent QB in the nation. Notice how I said “CONSISTENT”. The true freshman has completed 60% of his passes in 10 of 12 games. He has never thrown more interceptions than TD’s. He has had a QBR of over 100 in all but 1 game, and that came against the #8 Defense of LSU. Lastly, the most important stat, he’s still undefeated. The only stat in sports that matters is winning. You could throw for 9 touchdowns in a game, but if you lose, it will all be in vein.

Statistically all 3 of these of these great athletes deserve the Heisman trophy but that’s whats so great about this award, only one can win. Jackson shows Manziel type talent, but he just couldn’t fight through adversity in the big games. Foreman statistically out performed Derrick Henry, but even Foreman can’t carry his team up mount Everest. Lastly, Jalen Hurts. He does what any military general would do, keep his troops in line and win, at all costs.

And the 1st annual SportsbyStats Heisman Memorial Trophy* goes to:

*voted on by 1 person, reflects opinion of 1 person, all other opinions were thrown in trash.

Comment below with your Heisman Trophy winner and why. Oh, and back it up with some statistics please!

Three Big Reasons Why The Cleveland Browns Will Improve In 2018

The Day the SEC Died…

What The FBS Is Missing: A Thirty-Two Team Playoff

Addressing NBA Draft Eligibility: A Case Study Of The 2011 Draft

How The Interior Presence Of DeMarcus Cousins And Willie Cauley-Stein Is...